Broadway Workshop’s On Camera Film/TV workshop will allow students ages 12-18  to experience the techniques necessary to work in feature film as well as in television dramas and half hour comedies. Students will learn to memorize scripts quickly and relax in front of the camera. This class will focus on what makes each student special and how to best bring that out in their film/TV audition material.

In this workshop students will sharpen and expand their artistic and creative skill set through scene work and audition pieces. Our teachers will also guide students on what to expect when they are on set and how to best navigate the world of film and TV from the audition, booking and filming.

Students will receive sets of sides to work on in this class. The final session will be a mock audition for a major film/TV casting director where students will perform material that has been assigned to them by our instructors.

This class is limited to 14 Students! 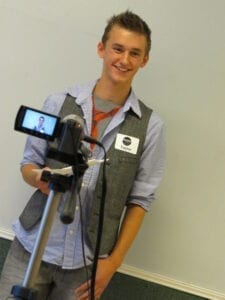 Joy Suprano is a graduate of the World Renowned Juilliard School in NYC. As graduate of the Juilliard School Drama division Ms. Suprano jumped in to the Film and Television industry. She has stared in and appeared in several Pilots, Movies, Television shows, Video games, and hosting projects and is most recognized for playing the role ‘Kristen’ on HBO’s hit television show “How To Make It In America”. She has also been featured in some amazing films such as “A Little Help” starring Jenna Fischer and Chris O’Donnell, “We Are The Hartmans” opposite Richard Chamberlain and “Lonely Boy”. Favorite television credits include series regular, recurring and guest star roles in: 40 (pilot), Law & Order: CI, How To Make It In America, Law & Order: SVU, 100 Questions (pilot), and Law & Order.