We are so excited to bring back Broadway Workshop guest teachers ARIANA DEBOSE, THAYNE JASPERSON, and JESS LEPROTTO for a very special one day dance workshop – SO YOU THINK YOU CAN BROADWAY!

So You Think You Can BROADWAY is Broadway Workshop’s newest program featuring 3 incredible back to back Dance Workshops with ARIANA DEBOSE, THAYNE JASPERSON, and JESS LEPROTTO – all who have found tremendous success on Broadway after competing on the hit TV series: SO YOU THINK YOU CAN DANCE.  This  3 hour workshop will focus on 3 dance workshops with 3 different dance combinations and is geared for students with a background in dance, ages 10 and up.  We know each student will feel challenged and rise to new levels after working with our amazing guest teachers! Below you find more info on our guest teachers for this workshop!

ADVANCED BEGINNER LEVEL: Must have previous dance experience. Should feel comfortable in a dance class. Students should wear clothes they easily can move in and bring dance shoes (No TAP needed).

ARIANA DEBOSE – Ariana currently stars in the new Broadway musical A BRONX TALE as Jane! Before that, Ariana was playing the critical role of “The Bullet” in the hit Broadway musical HAMILTON after a historic run Off-Broadway at the Public. She appeared in the Tony-Award Winning revival of PIPPIN as the Leading Player, directed by Diane Paulus. Her other Broadway credits include Mary Wilson of the Supremes and the cover for Diana Ross in MOTOWN THE MUSICAL and Nautica in the musical version of BRING IT ON. Before Broadway Ariana was a finalist on Season 6 of “So You Think You Can Dance”!

THAYNE JASPERSON – Thayne is currently performing in the hit Broadway musical HAMILTON as Samuel Seabury & Understudy for King George! He was a finalist on “So You Think You Can Dance” – Season 4 and continued on to the national tour. Thayne was also seen in the original Broadway casts of MATILDA and also NEWSIES where he received an “Astaire Award” nomination. His tour credits include WEST SIDE STORY (1st National) and OZ where shared the stage with stars from Danity Kane, Disney Channel and American Idol. Thayne was featured in hit Film/TV shows: High School Musical, HSM 2, Smash and MTV’s American Mall.

JESS LEPROTTO – Jess is currently on Broadway in the hit musical revival of CATS and will soon be seen in the upcoming revival of HELLO DOLLY starring Bette Midler. He made the Top 8 of “So You Think You Can Dance” during Season 8 followed by the national tour, for which he was named “Dance Captain”. He came back to Broadway where he joined the Broadway cast of Disney’s hit musical NEWSIES. Following NEWSIES, Jess was largely featured in the revival of ON THE TOWN on Broadway. His other Broadway credits include THE BOY FROM OZ, HOW THE GRINCH STOLE CHRISTMAS and BYE BYE BIRDIE. 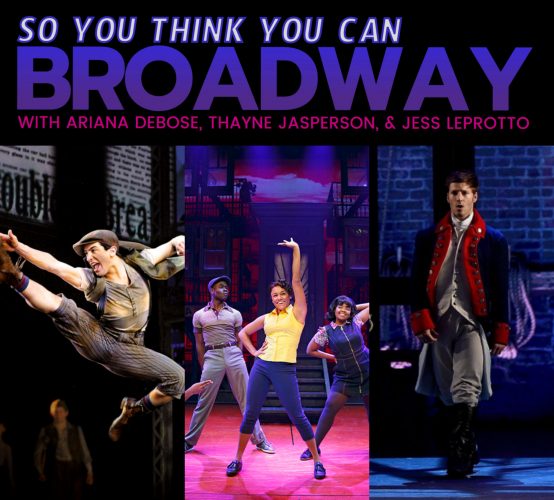